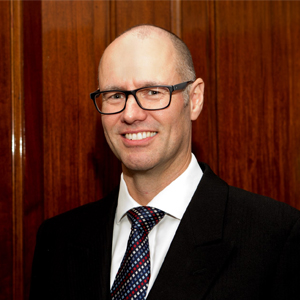 The Provincial Director of Ceremonies is responsible for co-ordinating all of the Provinces ceremonies and ritual; ensuring that these are carried out to the highest standard and in strict accordance with the regulations and traditions of Freemasonry in England. He is integral to seeing that the Province's Annual Meeting, held at Freemasons' Hall in London, is smoothly and efficiently run.

Barrie was born in 1968 in Hemel Hempstead in Happy Hertfordshire. His schooling included 5 years at the Halsey School; a name he would hear much of later in Freemasonry. He has spent over 30 years in the Computer industry in various Technical, Managerial and Program Management roles. He has always enjoyed being a member of organisations and the friendships they bring, having spent time in the 70’s, 80’s and 90’s in the Cubs, Scouts and Territorial Army. He is married to Sara and has three grown up daughters of whom he is very proud. In his spare time he tries to take his stubborn dog Lola for walks, go running, and watch the mighty Hatters (Luton Town).

Barrie was initiated into his Father-in-law’s Lodge Ellenbrook No 8155 in 1999 and served as Master in 2007. He joined Hertfordshire Masters No 4090 in 2007 where he is currently the Secretary. He also a member of Veritatem Sequere Lodge No 9615, the Lodge of the Red Rampant Lyon No 9843 and Lodge of True Aim No 9930. He is also a member of the Royal Arch and the Mark and Royal Ark Mariner degrees.