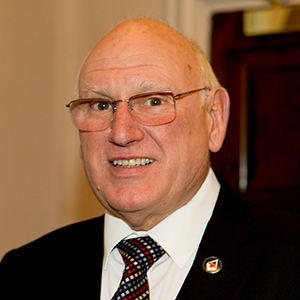 Dick was born in Bentley Heath near Potters Bar and is married with two grown up daughters. He was a keen rugby player at school and has maintained a close relationship with the Old Albanians Club and the school. His hobbies include clay pigeon shooting, gardening, motor boating and music; playing guitar, piano and drums (though happily not at the same time!)

Dick was introduced into Freemasonry by his father-in-law and was Initiated into his old school Lodge, Old Albanians No 4999 in 1986; going on to join Hertfordshire Masters’ Lodge No 4090, White Star Lodge No 8727, Lodge of the Red Rampant Lyon No 9843 and Lodge of True Aim No 9930. He is also a member of the Royal Arch and the Mark and Royal Ark Mariner degrees.