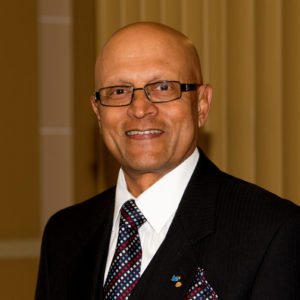 Jay was born in Kampala in 1955 and moved to the UK at the age of 17 when Idi Amin expelled Asians from Uganda. After six months in a refugee camp at RAF Stradishall in Suffolk, he and his parents settled in Hemel Hempstead. He has spent his working life in the IT industry and now runs a successful company together with his wife. He is a Freeman of the City of London and a keen sportsman, playing golf off a single figure handicap, and in his younger days played cricket for Hemel Hempstead Town. He also enjoys football, having supported Liverpool Football Club for the last 50 years.

Jay was initiated into Hemelhemstede Lodge No 7923 in 1990 and has subsequently joined Hertfordshire Masters’ Lodge No 4090, Old Albanian Lodge No 4999, White Star Lodge No 8727 and the Lodge of the Red Rampant Lyon No 9843. He is also a member of the Royal Arch and a Mark Master Mason.