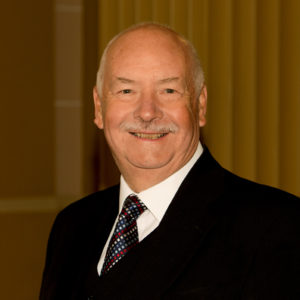 As the title would suggest, the Provincial Grand Treasurer is responsible for all financial matters within the Province; ensuring good governance and responsibility.

Richard was born and bred in East Yorkshire and, through his career as a Chartered Accountant, has variously lived in Leeds, Rhodesia/Zimbabwe and London. His hobbies include walking, with a penchant for the fells of the Lake District, and looking after his substantial garden. He is also a keen Hull FC (Rugby League) and Hull City (football) supporter and enjoys cricket, too.

Richard was introduced into Freemasonry by his father and was initiated into Harpenden Lodge No  4314 in 1984. After his father died, Richard learned that his grandfather had also been a Freemason. He is also a member of Hertfordshire Masters’ Lodge No 4090, White Star Lodge No 8727 and the Lodge of the Red Rampant Lyon No 9843.  Richard joined the Royal Arch in 1990 and is also a member of the Mark and Royal Ark Mariner degrees and the Royal & Select Masters.