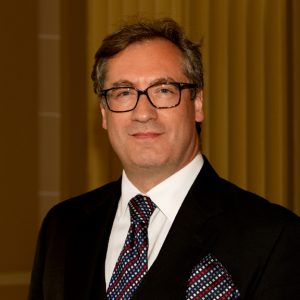 James Harrison, was born in Bradford in West Yorkshire in 1958, and was educated at Ampleforth College, York. After graduating with a degree in Behavioural Sciences in 1981, he embarked on a career in the music industry, working with small independent record labels across the North of England. He married Sara in 1987 and moved to Hertfordshire, where he started working in the toy business, designing and manufacturing board games. He continued studying with the Open University, and in 2013 added another degree to his collection; this time in Humanities and English Language.

He was introduced to Masonry by his father-in-law, and initiated into the Arkley (now the Arkley and Finchley) Lodge No. 7720 in 1990, becoming WM in 1996. He was appointed as Provincial AGDC in 2003, Provincial DepGDC in 2004 and Provincial GDC in 2008. In Grand Lodge he was appointed to PAGDC in 2008 and was promoted to the acting Grand Rank of SGD in 2015. He is also a member of Herts Masters’ Lodge No. 4090, White Star Lodge No. 8727 and was a founder member of the Lodge of the Red Rampant Lyon No. 9843. He was exalted into East Herts Chapter 3748, becoming Z in 2002; after serving as a Provincial Grand Steward was promoted to PPDepGReg in 2006. He was very pleased to be appointed GStB in Supreme Grand Chapter in 2013, the Bicentenary year. He is also a member of Herts First Principals’ Chapter No. 4090 and the White Star Chapter No. 8727. He was advanced in the White Stone Lodge of Mark Master Masons in 2009.

In his rare moments of free time between work, masonic commitments and avoiding gardening, he enjoys reading, fine wines, playing music and looking after his three grand-daughters, of whom he is inordinately proud.