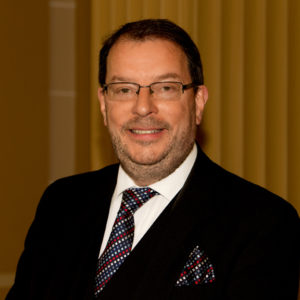 Born in Winchmore Hill in 1957, John Norris’s family moved to Ware when he was less than a year old, since when he has kept family roots in the Hertfordshire town. He studied English at the Universities of Leeds and London, and began teaching in Hertford in 1979, during which time he was also the Sub-Organist of All Saints’, the town’s large Parish Church. A love of church music drew him in 1987 to a post at King’s College Choir School in Cambridge, where he was Housemaster of the Boarders, English Master, Librarian and latterly – to his surprise (and dismay) – Head of I.T. In 1999, he moved to Oakham School in Rutland, where he spent sixteen years in the English Department and as Tutor to Senior Girls. He has now moved back to Ware, working freelance as an organist and funeral director. Among other regular engagements, he is once again at All Saints’, Hertford, as Associate Organist.

It was the early connection with All Saints’ Church, where the then Vicar, the Rev. Reginald Haw, was a senior Hertfordshire Freemason, that led to initiation into Hertford Lodge No. 403 in 1986. He was Master in 1995 and 2007, has had two spells as Director of Ceremonies and is currently Treasurer. He is a Member of Hertfordshire Masters’ Lodge No. 4090, Hertford Royal Arch Chapter No. 403 (where he spent six years in succession going through the Principals’ Chairs) and the Godfrey Kent Rose Croix Chapter No. 1117. Appointed Provincial Grand Standard Bearer in 2002, and Provincial Grand Sword Bearer in 2008, he became Provincial Junior Grand Warden in 2015. He is also a Past Provincial Grand Sword Bearer in the Royal Arch.

As organ accompanist to a number of choirs, he has had the privilege and joy of playing at many churches and cathedrals in England and Wales, including St Paul’s, Canterbury and York Minster, and in Venice and Rome. He has held a private pilot’s licence since 1982 and has a share in a light aircraft based at Nuthampstead in Hertfordshire. In addition to these activities, he is an ardent consumer of real ale and Indian food, interests which sadly cannot always be wisely, or safely, combined.