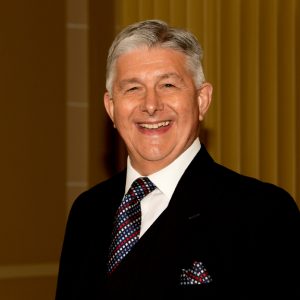 Paul Gower was born in North London in 1946 and attended the local grammar school, Edmonton Latymer. He was initiated into Freemasonry in 1978 in the Edmonton Latymer Lodge by his former Headmaster on the occasion of the Lodges’ 50th Anniversary. He became WM in 1987 and joined Hertfordshire Masters’ Lodge. He was Exalted into Royal Arch Masonry in 1981, Advanced in Mark Masonry in 1995 and Elevated in Royal Ark Mariners in 1996. He is also a member of the Ancient & Accepted Rite, a Liveryman of Plaisterer’s Livery and a Freeman of the City of London.

His entire working life, until his recent retirement, was spent in the financial and property sectors. He married Barbara in 1968 and they have two grown up daughters. Retirement enables them to pursue their joint love of horse racing, as well as extensive travel, opera, walking, the theatre and good wine & food.