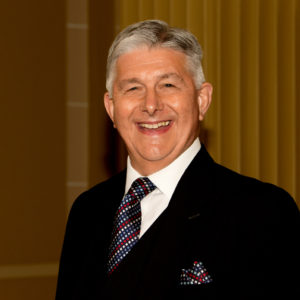 Paul was born in North London in 1946 and attended the local grammar school, Edmonton Latymer. His entire working life was spent in the financial and property sectors. He and Barbara were married in 1968 and have two grown-up daughters and one granddaughter. Since retirement from working life in 2006 Paul and Barbara have pursued their joint love of National Hunt racing as well as extensive travel, opera and the theatre

Paul was exalted into the Royal Arch in 1981 (where he held the acting Grand Rank of Deputy Grand Sword Bearer), Advanced as a Mark Master Mason in 1995 and elevated in Royal Ark Mariners in 1996. He is also a member of the Ancient & Accepted Rite (Rose Croix), Knights Templar and Royal & Select Masters. He is a Liveryman of the Worshipful Company of Plaisterers and a Freeman of the City of London.